His Holiness Padmabhushana Sri Sri Sri Jagadguru Dr. Balagangadharanatha Mahaswamiji (1945-2013) inherited the Natha lineage as early as at thirty years of age on the auspicious day of 24th September 1974.  He became a seer of the Adichunchanagiri Math, inspired by the desire to serve the country men and thread the path of Spirituality. He became the 71st pontiff of the Adichunchangiri Dharma Peetha and worked tirelessly to realize his vision of revolutionalising the Society through Spiritual, Educational, Social, Cultural activities of the Math. He travelled all round the country and the world at large understanding the needs of the people. Having comprehended the prime requisites of this hour he plunged to take up various initiatives aiming at the integral development and progress of the nation. This objective could be achieved only by involving in Jnana and Karma Paths, as described in the famous scripture of Bhagavadgita. The Swamiji as a true Sanyasi dedicated the whole of his life for service to others/Society at large.His Holiness was truly an enlightened and realized soul for he treated all the people alike,without discriminating on the basis of caste, creed, sex or status. His approach towards handling different problems was truly scientific and logical. He implicitly understood the importance of Education to the masses in alleviation of poverty. This led to the establishment of Sri Adichunchanagiri Shikshana Trust formed in 1973, through which several Educational institutions and schools have been set up. At present, 515 such schools are functioning across the State/Nation aiding the Government in educating the rural and semi rural children. This campaign of Jnana Dasoha ranges from providing primary education to the rural poor to making available professional education to meritorious students.  He not only emphasized modern system of Education but also advocated traditional Teaching systems. His Holiness Mahaswamiji, was a great visionary with a perfect blend of science and spirituality which is evident by the gesture of establishing orphanages and care centers for destitute women and children. Women in distress are provided succor by training them in various skills and vocational activities to earn their livelihood. Centers for care and treatment of mentally challenged and geriatric individuals have been set up. Being a patriot in real sense, he took up disaster management and rescue activities whenever calamities struck in any part of the country. The Math provided free food grains clothing and essential drugs to the victims of calamities. They were given medical aid at times of infliction from earthquakes, cyclones etc. Through his Go-Green Earth movement he aimed at achieving one person one plant theme which resulted in planting of around five lakh trees today in and around Bangalore. Establishment of Goshalas, Vanamahotsava, Jalavardhana programme were all the results of his concern for society, human beings and animals. His humane touch alleviated woes and distresses of many people who viewed him as a realized Jagadguru and savior of masses. Many titles and honors were conferred on him but his humbleness only added on to his glory and pomp.

The Mahaswamiji mingled without any discrimination with the local people and participated in Utsavs and Jathas. Personality development & amp; women empowerment programmes and also Mass marriages, free Health camps, counseling services were also conducted by the Math. It is the collective responsibility of the community to continue and preserve the devoted services of His Holiness Jagadguru Sri Sri Sri Dr. Balagangadharanatha Mahaswamiji , during whose era the math reached the maximum grandeur. Persevered efforts of this 71st  pontiff should be the ideal for the forth coming successors to work for Humanity selflessly and exhibit more zeal than before in achieving the dreams and visions of the former come to reality 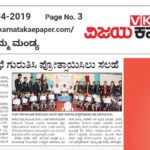